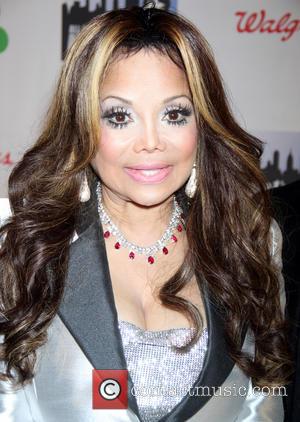 La Toya Jackson proved she can take a joke during a skit on U.S. show Chelsea Lately on Monday night (20May13) when host Chelsea Handler asked her for plastic surgery advice and mocked her high-pitched voice.

The odd couple teamed up for a spoof American Idol audition and both joked that they wanted a spot on the panel for season 13 of the show.

But when Jackson said, "I would be a great judge on the show... because, like Simon Cowell, I'm very opinionated...", the comedienne cut her off and said, "You don't strike me as being very opinionated at all. With a voice like that, you sound like a chipmunk."

Handler then sang for her sidekick, who clearly found her tuneless offering rather unpleasant, prompting the host to joke, "I would just like to ask you when I get older, where do I get my face?"

Jackson took the jokes in her stride and tried to keep a straight face.

Handler then quipped that she made the audition tape with her pal at the request of Idol producers, who decided not to air it, "I'm assuming because they didn't want to p**s off Mariah Carey.