Labrinth popped into Nordoff Robbins music therapy class to meet three children who suffer from learning disabilities or autism. The 'Earthquake' hitmaker admits he was ''inspired'' by the session. 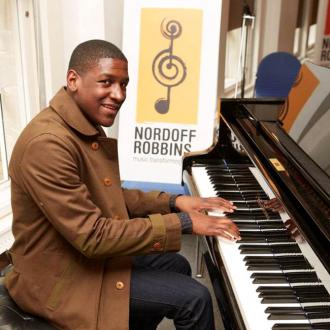 Labrinth was ''inspired'' after meeting children at a Nordoff Robbins music therapy class.

The 'Earthquake' hitmaker used his musical skills to connect with three children, Alex, Imen and Adelaide - who suffer from autism or severe learning difficulties - and encouraged them to communicate through their love of music at the Charity's London centre.

Labrinth said: ''This session has shown me music should be an expression, a way of communicating to other people and getting the purest message across that you can. I feel very inspired after this.''

The 24-year-old singer - whose real name is Timothy McKenzie - popped into the class to see first-hand what the music therapy sessions can do for children, who often live isolated lives, and says he learned more because they bonded over instruments.

He said: ''If we had been just talking I would've found it a lot harder to get involved, whereas this was using something I know - music - that is very familiar to me. That's why I was so keen to get involved.

''When we were all playing instruments, I thought, 'I've never met these kids, yet I feel at ease' and that's because I know music, and they know music and we were communicating.''

The global star has been recognised for his talent as a producer, rapper and singer and will be presented with the American Express Innovation Award at the Nordoff Robbins Silver Clef Awards on June 28.

Speaking previously, Labrinth said: ''It's amazing to be awarded the American Express Innovation Award. Especially when my pal Emeli Sande won it the year before.

'' I'm always looking for new ideas and inspiration for my music. Music is my life, so to see how it can help so many people through music therapy is really cool.''