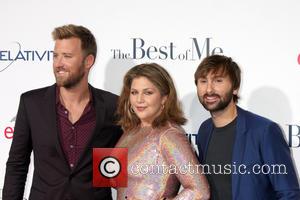 Picture: Lady Antebellum, Hillary Scott, Charles Kelley and Dave Haywood - Photographs of the stars on the red carpet for the premiere of "The Best Of...

Lady Antebellum dedicated a performance of Luke Bryan's Drink A Beer to the singer on Tuesday (02Dec14) after a death in the family forced him to bow out of an appearance at the Country Music Television Artists of the Year concert.

Bryan's brother-in-law, Ben Lee Cheshire, passed away in Georgia on Saturday (29Nov14) at the age of 46, seven years after his wife Kelly - the star's only sister - died unexpectedly, aged 39.

He scrapped all of his live commitments for this week (begs01Dec14) to spend time with his relatives, but he was firmly in his peers' thoughts as they celebrated his career as one of the honourees at the Cmt Artists of the Year show.

Lady Antebellum and singer/songwriter Chris Stapleton treated the audience at the Nashville, Tennessee bash to an acoustic cover of Drink A Beer, which honours Bryan's late brother and sister, after band member Charles Kelley dedicated the tune to their absent pal.

He said, "Tonight, if you're watching back home, Luke, this one's for you and your family."

The touching moment was not lost on Bryan, who subsequently tweeted, "That was amazing. Truly. Thank you Charles, Dave, Hillary and Chris! Beautiful!!! Thank you fans for your love."

Other performance highlights at the Cmt prizegiving came from another honouree Jason Aldean, who teamed up with rocker Chris Cornell to open the show, while Eric Church, Ashley Monroe and T Bone Burnett joined forces for a rendition of Artist of a Lifetime recipient Merle Haggard's hit Workin' Man Blues.

Actor Billy Bob Thornton was also on hand to pay tribute to Haggard, comparing him to writers like John Steinbeck and Tennessee Williams, saying, "He's truly a storyteller. And that's something that has been lost."

Miranda Lambert and Keith Urban were also among the musicians saluted at the Cmt gathering.