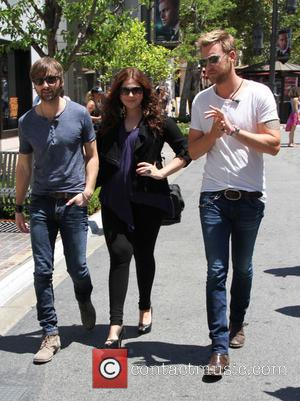 Lady Antebellum star Dave Haywood and Charles Kelley used to draw straws to find out who would be sleeping with bandmate Hillary Scott.

It's not what it seems - the trio was so poor starting out that the singers all had to share the same hotel room.

Scott explains, "We were so broke in the beginning that they would draw straws."

Kelley adds, "One of us (guys) would sleep with her 'cos we didn't really wanna stay in the same bed."

Scott, who is now married to the band's drummer and pregnant with her first child, insists she has never been intimate with her singing pals, even though she approached Kelley in a bar to kickstart their friendship.

He recalls, "We were in a bar in Nashville and she walked up to me and she had heard some of my music randomly online and she said, 'I really like your voice'.

"I said, 'Let's get together and write some songs', which is a pretty typical Nashville pick-up line... She came over about a week later and we started writing and formed a band."