Review of Born this Way Album by Lady GaGa

Bursting from the cover of her third album, which depending on your edition depicts her as part-motorbike or part-alien, one thing is undeniable - Stefani Angelina Germanotta was certainly not born this way. 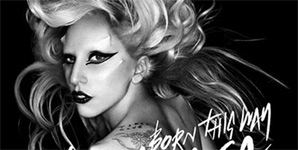 What she has achieved at the relatively tender age of 24 is something nearly unfathomable. Not merely a pop star or a singer but a woman who has in 3 years embedded herself so deeply into popular culture that it seems almost impossible to think back to the time when Lady GaGa did not exist. She may be your cultural zeitgeist or your idol but she is inescapable. The largest online presence of any artist: her youtube videos have been viewed over 1 billion times, more people follow her on Twitter than Barack Obama (9 million to her 11).

Yet, when Gaga arrived with the single 'Just Dance' and an album, The Fame, it was for the most part inoffensive disco pop. Only a few flashes of strange brilliance, notably 'Paparazzi' and a few modestly weird wardrobe choices (in hindsight) set her aside from the crowd. It wasn't until her units shifted and presumably the sphincters at her record label relaxed that we were exposed to her darker eccentricities. Second album The Fame Monster was ambitious and overblown in concept and execution. The results? A tour that reportedly ran millions over budget and the 17 minute landmark video, 'Telephone.' The latter was probably the most exciting thing to happen to pop videos since 'Thriller,' with Beyonce no doubt counting her lucky stars that she was brought along for the ride.

What has transpired since then is her Fame Monster has grown more colossal and terrible than ever before. The meat dresses, the conceptual 'hatchings' and the campaigns for sexual equality have made us gawkers at a highly thrilling, wonky sideshow. The artifice of her theatre performance has eclipsed almost everything, making critical evaluation of her music seem somewhat redundant. However, it is best not to lose sight of what actually matters here in a consideration of her album: the music. Born This Way is not a full tour de force, but rather the sound of a woman still experimenting with her considerable talents. Gaga is not afraid to delve into the unknown, even if it doesn't come off 100% of the time.

Beginning and ending with the most operatic songs of the 17, (Marry the Night, Edge of Glory) Born This Way is essentially a trashy electropop party sandwiched between two beefed up 80s power ballads. Gaga had intimated that Born This Way would be a 'hard partying' sort of affair and in this respect it doesn't disappoint. The pounding, floor filling beats are relentless: 'Government Hooker' backs the jiggy-assed beat of 'Lovegame' up against the vague politics of the slogan 'love me, John F Kennedy.' The deadpan and nearly perfect SchieBe is pure eurotrash, with the throaty German intimations and feminist teachings spliced against 90s synths, out of all the new ideas at play on BTW, this is one that she shoulders with the most accomplishment.
The first two of the three singles to date will be familiar to anyone not living in a nuclear bunker for the past year. Title track 'Born This Way' draws obvious comparisons to Madonna's 'Express Yourself' (much to the apparent disdain of its creator). Despite this, it remains strangely affecting and shows Gaga at her finest, a champion of difference and self esteem -cementing its author as a gay icon as much as Madonna ever was. 'Judas' on the other hand is easier to dismiss on first listen, it sounds pretty dumb until its biblical sentiments reveal themselves more fully on the third or fourth play. Reading too much into Gaga's slogans would be foolish, after all this is pop music. However the frivolity and frankness with which she explores serious concerns: religion, sexuality and female empowerment is both infectious and refreshing. She is the agent rather than the passive, doe-eyed, Katy Perry femmebot, bending over and winking suggestively.

The swirling mix of musical styles mirrors the platitudes at play across the album. Famously a musical chameleon, Gaga is unconcerned where she borrows from, for instance hair metal rears its head in 'Heavy Metal Lover' and 'Bad Kids,' the latter which has a smattering of distorted Daft Punk guitars.

Final track and third single, The Edge of Glory, takes on a much sadder tone in retrospect after the passing of legendary E Street Band saxophonist Clarence Clemons, who contributed to this and two other tracks on the album. It's her most 'Bonnie Tyler' moment on here and her most vulnerable, in stark contrast to the rest of Born This Way. She leaves us looking at a chink in her there-to steely armour.

So there are a couple of weak moments on Born This Way and some of great triumph. For an album clocking in at 17 tracks long that was to be expected, and it has to be said: there could have been an excellent 12 song album here if Gaga had chosen to trim it down. But censorship and editing is not her bag, after all. What you have here is The Real Thing, an exciting and world conquering pop star, an author of her own success.