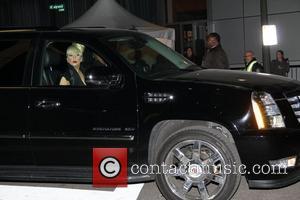 Lady GaGa has her sights set on U2's record for the highest grossing tour in history, and is expected to announce a mammoth 450 concerts for 2012. The singer, 25, is looking to visit every corner of the globe, with a source telling the UK's Sun newspaper, "The Haus Of Gaga is taking things up a gear".
In a bid to match the heady heights of Michael Jackson and the Rolling Stones, the Born This Way star is planning to kick things off in Asia next year before heading around the world for one of the biggest tours in history. An insider revealed, "As is always the case with Gaga, the plans came to her in her sleep. She has a target of 450 dates. It has never been done before, but she's doesn't think that's a reason not to try". During an interview last month, Gaga had hinted at plans for a huge series of gigs, admitting she had already begun work on the stage design with the team behind Take That's 'Circus' and 'Progress Live; shows. The news comes just days after she debuted her 14 minute Marry the Night video, which features the star wandering around in the nude, sticking breakfast cereal to her face and fantasizing about two female nurses.
Her last worldwide jaunt, the Monster's Ball tour, was a commercial success having grossed a reported $227 million from 200 shows. The concerts drew an estimated audience of 2.5 million in total. Between 2005-2006, U2 sold nearly 5 million tickets for 131 shows on their Vertigo Tour - grossing a huge $389 million in the process.