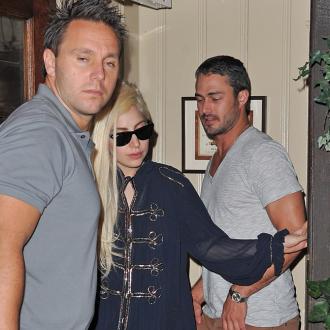 The 'Applause' hitmaker doesn't mind Taylor Kinney - who she has been dating for three years - getting close to his 'Chicago PD' co-star Sophia Bush because she is confident in their romance and understands he is just doing his job.

Sophia said: ''[Gaga is] an artist through and through. There's no part of her that doesn't understand our job or thinks it's weird. I thinks she's probably the least threatened woman on the planet.''

Sophia also admitted her first encounter with the 28-year-old singer - whose real name is Stefani Germanotta - was ''a little strange'' because she had already shot intimate scenes with Taylor at that point.

She told DigitalSpy: ''It's always a little strange to meet the love of someone's life after you've swapped spit with their partner!

''But she's just the loveliest human being and so warm and welcoming - I've been such a huge fan of her for so long.''

However, the 32-year-old beauty - who is in a relationship with Google programme manager Dan Fredinburg - admits she was pleased she didn't meet Gaga when she first started working with her boyfriend as she thinks she'd have been overwhelmed.

She said: ''I didn't get to meet Stef until after Taylor and I started to work - I was really glad I had a while to wrap my head around it, because if I'd have met her in my first week in Chicago, I probably would have cried and it would have been real awkward for everyone!