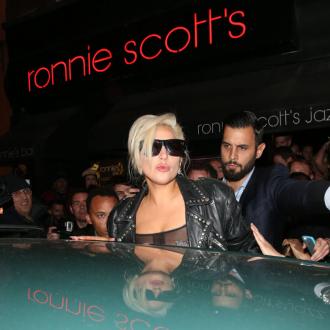 The 'Do What U Want' hitmaker had been scheduled to perform a charity concert in the city's Royal Albert Hall alongside her 'Cheek to Cheek' collaborator Tony Bennett earlier in the evening, but was forced to cancel the show after the 88-year-old crooner fell ill with flu, so decided to hold an impromptu performance at the iconic Soho club instead.

The 29-year-old star - who got engaged to actor Taylor Kinney earlier this year - arrived at the venue in a Rolls Royce before performing a 30-minute set with her band during the club's Late Late Show, including a rousing rendition of Cher's 1966 hit 'Bang Bang (My Baby Shot Me Down)' and other jazz numbers she would typically sing with Tony.

Wearing ripped fishnet tights and a leather outfit, the 'Born This Way' singer wowed with her performance, with audience members taking to Twitter to gush over the performance.

One lucky onlooker wrote: ''I'm so happy I got the chance to see gaga sing jazz at Ronnie Scott's jazz club, it was beyond. What a grand singer&entertainer. Legend (sic).''

Lady Gaga isn't the first famous face to have graced the stage of the venue's Late Late Show - which takes place after the main show, from Monday to Saturday until 3am - having previously hosted surprise performances from Prince, Mos Def and Stevie Wonder.