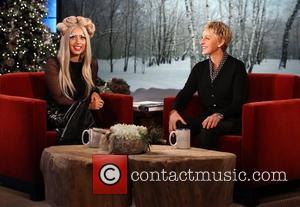 Picture: Lady Gaga makes an appearance on “The Ellen DeGeneres Show” on Friday, December 9th. Lady Gaga talks about her acting dream role and why she...

Lady GaGa performed a saucy version of the festive classic 'White Christmas' when she appeared at New York's annual Jingle Ball concert on Friday (9 Dec 2011). Lady Gaga wanted to add a bit of a twist to the Bing Crosby classic.

During the performance, Lady Gaga explained: 'I recently added a couple of lyrics to this song because I think it's too short. It's like when you really start to enjoy it, it stops. It's like a really bad orgasm. Merry Christmas New York.' Talking to the audience, the star also reminisced about how she would attend the Ball as a child: 'I worked so hard and when I was 11...my mom got me tickets to Jingle Bell Ball.' During her set, she also sang 'Telephone', 'Edge of Glory' and 'Just Dance' and 'Born This Way'. Other stars at the event included Kelly Clarkson, Demi Lovato, LMFAO, Pitbull and David Guetta.

Lady Gaga recently suggested that she already knows the name for her third album. Talking to MTV News, she said: 'I've started writing it and I have the name for it and all the concepts are beginning to flourish and take place. I'm excited to put it out, but it's not done yet. So I'll put it out when it's done.' The superstar is currently planning a 450-date two-year world tour that is set to smash all records.