Lady GaGa slapped Taylor Kinney when he kissed her for the first time on the set of her video 'You and I' because she wasn't expecting it. 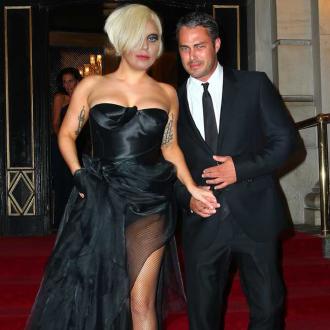 Lady GaGa slapped Taylor Kinney when he kissed her for the first time.

The 29-year-old singer met the 'Chicago Fire' star when he starred in the video for her 2011 single 'You and I' and he caught her off guard with an unscripted lip lock, prompting her surprised reaction.

Taylor recalled: ''I remember I went up, and we're rolling, and I kissed her and she didn't expect it.

''They cut, and she slapped me. And it was just awkward. And the next take, I just did it again and then she didn't slap me. She didn't slap me then. We had a good time.''

Despite the ''awkward'' incident, the 35-year-old actor believes he and his now-fiancee had ''chemistry'' from their first meeting, revealing they started dating soon afterwards.

Speaking on 'Watch What Happens Live', he said: ''I think there was chemistry. It was a late shoot. We were shooting until four or five in the morning. We exchanged information. A few weeks went by and we kept in touch and then that's that.''

The couple got engaged in February this year but haven't started planning their wedding or even set a date yet.

Taylor said: ''We're so busy. We've been engaged for less than a year. So, we've been talking about whether it's New York, Los Angeles, destination place so we don't have an exact date yet.''