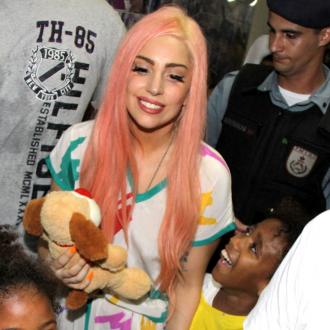 Lady GaGa has advised Lindsay Lohan to ignore her critics.

The 'Born This Way' singer has praised the 26-year-old star's performance as Elizabeth Taylor in her new movie 'Liz & Dick', which aired in the US yesterday (25.11.12), and insisted she is a ''great'' actress.

Writing on her twitter page today (26.11.12), the 26-year-old singer voiced her support for Lindsay's comeback, saying: ''You did a beautiful job on 'Liz & Dick', Let no one bring u down, Liz didnt, they always try to knock the greats down a few pegs (sic)''.

Lindsay and Lady Gaga have been good friends for some time and enjoyed a slumber party with singer Lana Del Rey at the Chateau Marmont in July where they apparently spent the evening together ''watching old movies and playing board games.''

'Modern Family' star Jesse Tyler Ferguson also defended her this morning, writing: ''The day after 'Liz & Dick' I just want to say: She's already down. Lets not kick her (sic).''

Lindsay - whose probation is tipped to be revoked in the near future after she allegedly lied about being behind the wheel of a car during an accident in June - has received mixed reviews for her performance in the Lifetime movie including lots of negative feedback from her Hollywood peers.

Joan Rivers blasted her performance on twitter, writing: ''Lindsay Lohan's probation will be revoked because she lied to police. The same goes for her SAG card after playing Elizabeth Taylor.''