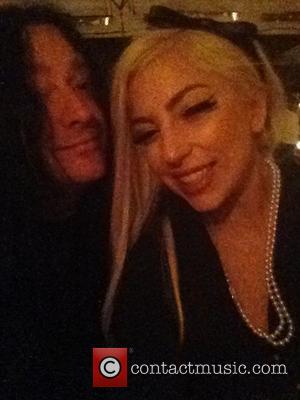 Picture: Lady Gaga posted this image of herself on Twitter with the caption: With my buddy Jonas. Being weird for money

Lady GaGa will be starring in Robert Rodriguez's latest action movie, according to Bbc News today (July 27, 2012). Mother Monster, as she likes to call herself, will be playing the role of La Chameleon, in MAChete Kills. Rodriguez confirmed the news via his Twitter feed, posting a movie poster showing the pop singer in character. On the film noir-style poster, she is posing in a skimpy yellow outfit, with stockings on, holding a smoking gun, with what seems to be an Alaskan wolf skin draped around her shoulders.
The image was accompanied by a message that read "I just finished working with LadyGaga on MACheteKills... Holy Smokes. Blown away!" Her performance in the movie marks her first proper acting role, though she has previously appeared as an extra in The Sopranos. She has also made cameo appearances in Men in Black 3 and The Simpsons, playing herself. This is the first time that she has tackled a scripted character though and if Rodriguez's excitement is anything to go by, movie fans should be getting very excited to see her debut acting role, which will be hitting the cinemas in 2013. Gaga expressed her own excitement, once the filming was over, with her own tweet, which read "will be making my debut as an actress in the amazing Machete Kills By Rodriguez Im So Excited!!! AH! Filming was insane."
Lady Gaga stars alongside Amber Heard, Sofia Vergara and Mel Gibson in the movie, which is a follow-up to the 2010 film MAChete, which starred Danny Trejo. Critics weren't fond of the film, but the public most certainly were. MAChete raked in around $44 million globally, which was around four times its production budget.