Lady GaGa will perform her first proper gig in seven months this September when she takes to the stage at the Roundhouse in Camden, north London, for the iTunes Festival. 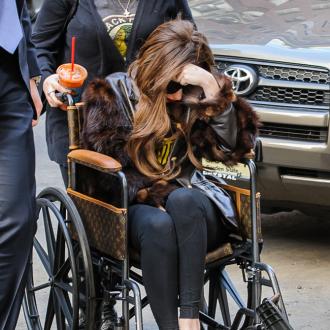 Lady GaGa is to play her first proper gig in seven months at London's iTunes Festival in September.

The 'Paparazzi' hitmaker - who has been out of action for the majority of this year after suffering a labral tear on her right hip, which required an operation leaving her wheelchair-bound - will perform at the Roundhouse in Camden, north London, and her team is set to splash out £500,000 on production.

A Gaga insider said: ''The gig in Camden has a huge budget and is likely to be the first anyone sees or hears of her album. The Haus Of Gaga team have been working in secret on costumes and stage sets for the show from their base in Paris.''

The 27-year-old singer will also use the concert at the 3,300-capacity venue - which hosted famous faces such as Jimi Hendrix, The Rolling Stones and Led Zeppelin in the 1960s and 1970s - to launch her forthcoming album 'Artpop', on which the star is expected to take a new direction.

The insider added to The Sun newspaper: ''Gaga's dancers have also been rehearsing but she's only told her closest friends about the new direction she's taking. The music is going to be a big departure and Gaga's dreamed up a whole new image for the album.''

Several acts have already been confirmed for this year's iTunes Festival including Arctic Monkeys, Sir Elton John - who is hoping to be back for the event despite cancelling his remaining summer concert dates after being struck down with appendicitis - Kings Of Leon and Justin Timberlake.

UK fans can win tickets using the iTunes Festival app and the iTunes Store as well as select media partners.