In this somewhat sanctimonious and cynical world in which we live, where everything is analysed to the Nth degree and there is more time spent looking at flaws and faults than achievement and artistry, it would be quite easy to be derisory about Lana Del Rey (many of her detractors already have been). I think some are happier just to pick holes whilst others are just missing the point and don't get it. Either way they are losing out. 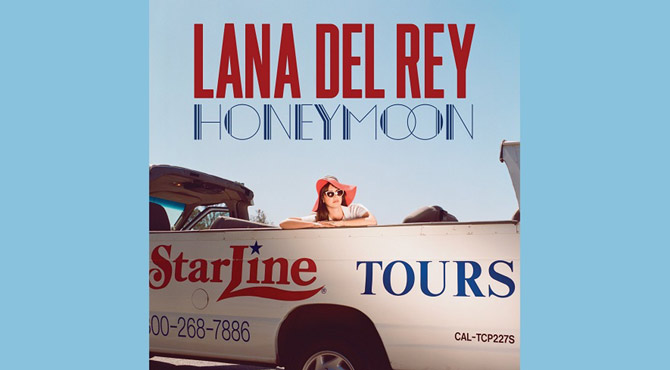 Lana Del Rey is unique. Her whole image, persona, style, song writing and delivery is unparalleled in contemporary music. Whether you think it's conceptualised or cliched doesn't really matter to me because the end result is such sublime music. She may be mocked and mimicked in equal measure but no one does what she does so well; there is no one who can touch her as a torch song singer.

Lana Del Rey is like a David Lynch dream realised. She flirts with the seedy, sleazy and subversive but sells the seductive, sultry chanteuse so well. Lana lives in a world between twilight and dusk where lamp light and shadows make for a sense of foreboding unease. She's a guilty pleasure that resides in a perversely attractive dimly lit underworld. On her fourth album, 'Honeymoon', Lana barely sets foot into daylight, she inhabits a world of cocktail dresses and kitten heels, double-breasted wide pinstriped suits and brogues, flock wallpaper, velvet and velour and you have to say she's in her element.

'Honeymoon', is moodier, darker and more melancholic than each of her previous albums to date but it's also the most consistent and cohesive. The references to popular culture that Lana is so adept at splicing into her lyrics litter her latest album. Bob Dylan, Bowie, Jessie J, The Sugarhill Gang, Foreigner and The Eagles are all caught up along the way, mixing seamlessly with familiar phrases, clever observations and even wry humour. There are some brilliant lyrical moments on 'Honeymoon'. Lana is not only capable of reawakening over used sayings such as 'no holds barred' and 'let sleeping dogs lay' amongst others but she is also capable of much much more. It's not easy to sing anonymity ('Freak') or have the artistry to rhyme Art Deco with ghetto and gun metal but Lana Del Rey manages it with consummate ease ('Art Deco').

Lana's latest release, however, is not all about the sultry and seductive, sometimes angelic vocals, it's also more than ever about the soundscape that accompanies that sumptuous voice. The orchestration and instrumentation are spectacular and the overall production is unimpeachable. There are John Barry strings (approaching Bond soundtracking on 'Terence Loves You'), Drum & Bass beats on first album single 'High By The Beach', and stripped back Animals like guitar backing the layered harmonised vocal on 'God Knows I Tried'. The entire album is full of superb creativity. There are moments of real intimacy as well as gloriously epic cinematic soundscapes that punctuate 'Honeymoon' and each are joyously magnificent. The consecutive three tracks of 'Religion', 'Salvatore' and 'The Blackest Day' are worth buying the album for alone.

To close out 'Honeymoon', Lana Del Rey, rather ironically or not, chooses to do her interpretation of the classic 'Don't Let Me Be Misunderstood'. Her smokey vocal is perfect for the song and the beautifully crafted backing works as a perfect foil. It's a fabulous finish to a fantastic album.