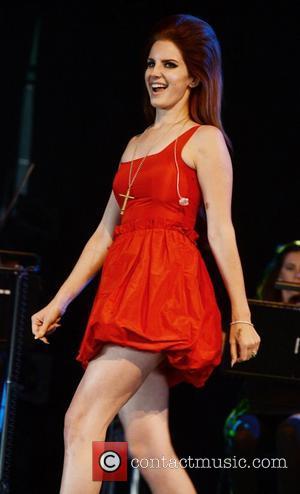 Yesterday (July 4, 2012) was Independence Day in the United States of America and one of it's most popular recent musical exports made sure that the Montreux Jazz Festival joined in the patriotic celebrations. Lana Del Rey closed her 45 minute set at the Swiss event with her latest single, 'National Anthem.' She may not have been confident enough to tackle the real National Anthem but it was still a fitting end to the set, accompanied by images of Elvis Presley, John F Kennedy and the American Flag on the big screens.
The response from the fans was largely positive, which will no doubt be encouraging for Lana as she has been hampered by many criticisms of her vocal ability when singing live. Some were disgruntled by the brevity of her set though, having expected her to play for longer at the Miles Davis Hall. One British fan who had travelled to see the festival told Reuters "She was amazing, mesmerizing. It was a bit short, I would have listened longer. The supporting act was too long." Another visitor, Dany Faigaux from Geneva, told the news agency "It was very good, but 45 minutes is a little light. She didn't even introduce the musicians."
Lana Del Rey's album 'Born To Die' has currently made her the third biggest-selling artist of 2012 in the UK, after Adele and Emeli Sande, according to the figures published on Monday by the Bpi. The Montreux Jazz Festival also included performances from Bob Dylan, Katie Melua and HUGH LAURIE.