Pirates and batteries aren't common interview topics but this is no ordinary band.
Larrikin Love's innovative approach and sound is as diverse as the topics just mentioned. Their nomad sound emanates all that is good about indie, country and Irish folk music and is wrapped up tightly with Ed's exhilarating yet elegiac lyrics.

Contactmusic got the chance to talk to Ed Larrikin and Coz Kerrigan after their set at the Secret Garden Party and below is the ordered and edited down version of what randomly happened.

Larrikin Love: [Ed] Errm.yeah.
[Coz to Ed] I thought it was quite good, did you not enjoy it?
[Ed] I didn't it was awful I couldn't hear a thing.

CM: I've seen quite a lot of bands over the weekend and every band without exception has had problems on stage.

LL: [Ed] It's just a really bad sound on the stage and I couldn't hear a f**king thing. Either I was really loud or I was really quiet and then when I started playing the ukulele it was clattering and feeding back and I think the pickup in my ukulele came loose and started banging about.

CM: Well it sounded good out there and there was a really good reaction. I mean that was like one of the best reactions I've seen over the weekend. So you said you didn't enjoy it but you guys looked so happy and exuberant on stage.

CM: Is this something you take into the studio, during the making of the album?

LL: [Ed] Yeah it is being a perfectionist isn't it, I don't think that's just with music and being in a band but also in everyday life. If you don't think something's perfect then you go "That's really rubbish" but it's just being an idiot really as tomorrow I'll go "Hi mum, it went really well" not that my mum calls me all the time.

He [Coz] wants a high five.

CM: So on the album you've got loads of cameos, how did that come about?

LL: [Ed] There's loads of cameos and they're just all our friends you know. We've got Jamie Treays on it. There's a really early song that I wrote ages ago and I wanted a little boy on it like Jamie and a girls voice on it as well, so that was nice. Then Rumble strips who we met just playing on tour, they did some stuff. Patrick Wolf is a friend of mine and he came and did some piano and some viola. Alex from Vincent Vincent and the villains played some cello on it. Rob skipper from the Holloway's played some fiddle on it. A boy called Johnny fielding plays on it. Loads of people are playing on it, so it's been good. There have been loads of cameos and they've all been fantastic.

CM: I'm really looking forward to it. So you're very lyrically poetic, what kind of places are you getting inspiration from?

LL: [Ed] All kinds of things, everyday life. It's so easy to pickup things and talk about it, so it's good.

CM: So what you reading at the moment?

LL: [Ed] I'm reading a book called `Coasting', it's a half travel book and half biography.

[Coz] Is it easy reading?

[Ed] No not at all, there is no coasting involved apart from the title. Basically it's about this guy who writes about his loathing for the British Isles and his childhood, it's really good actually. I only started reading it yesterday.

CM: When you said that I thought it might have been inspiration for `Downing street kindling' but if you only started reading it yesterday.

LL: [Ed] No and at the same time I'm reading this book about the lives and times of Joan Baez her sister Mimi, Bob Dylan and Mimi's husband Richard FariÃ±a. It's really good you know it's hot.

CM: Sounds good, is it a biography?

LL: [Ed] Yeah, it is actually really good I'm not joking; it's got great pop songs.

LL:[Ed] Have you seen any other good bands this weekend, apart from Larrikin Love?

CM: Yeah an unsigned band called Hush the Many.

LL: [Ed] Yeah Hush the Many! Kid Harpoon is going on about Hush the Many they're meant to be really f**king amazing.

CM: Yeah they are they're playing a little acoustic set later on you should check them out.

LL: Do you know when pirates talk to each other and if someone's an idiot they call them longshanks, because they're all gangly and a fool, longshanks - I think that's great. So you say "shut up longshanks" and also when are they gonna make a battery which lasts longer than a duracell?

CM: Do you want me to tell you something interesting about batteries? Which you probably wouldn't of heard of.

LL: [Ed] Oh test me Adam, because phone batteries last for like 70 hours so why can't they make a duracell last that long?

CM: Don't worry about the interview I'll piece it all together later.

CM: Apparently a couple of years ago, it's conspiracy theory so I don't know if it's true. But a guy has come up with a battery that will last for like a year but all the big players like.. [Edited for fear of being sued]... came together and paid him off to keep it quiet.

CM: I think that's what he's done, say if he sells the idea for like $100 million then that's it. As lets say you've got your remote batteries or whatever and they last for a year then you're not gonna pay like Â£5 a pack every time. So it's like capitalisation at its finest holding back technology, I don't know if it's true or not but it's feasible isn't it?

CM: Well you can get light bulbs that can last for a year now can't you?

LL: [Coz] Yeah, I've got them at my house the energy saving ones and the light that comes out of them is rubbish.

CM: Yeah they're crap, you turn them on and they take about 10mins to...

LL: [Coz] ..warm up and the light that comes out of them looks horrible it's not white it's yellow and it makes everything in your house look not very nice..

And on and on it went randomly talking about pirates and batteries whilst we ate lamb and mint crisps in their portacabin dressing room, it was thoroughly enjoyable.

Their album `The freedom spark' is out on September 25th and check them out on their extensive UK tour throughout September and October. 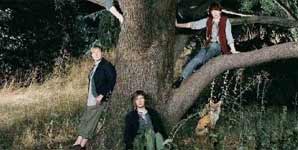 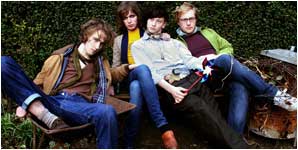 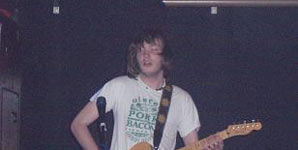 Larrikin Love - With Support from The Rumble Strips 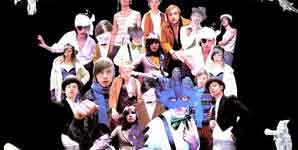