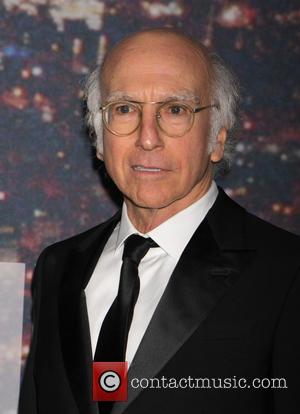 Picture: Larry David - A host of stars including previous cast members were snapped as they arrived to the Rockerfeller Plaza for Saturday Night Live...

Actor Larry David has split critics with his Broadway debut in Fish In The Dark, with some reviewers hailing the "very funny" play and others dismissing it as a "tedious", drawn-out version of his Tv comedy Curb Your Enthusiasm.

The production, written by and starring the veteran funnyman, broke box office records before previews even began at the start of February (15), but the hype surrounding the sold-out show, about a death in the family, failed to warm some reporters as they settled in to watch the play at its official opening on Thursday (05Mar15).

Mark Kennedy of the Associated Press was among those left cold by the premiere, describing it as a "tedious and self-indulgent" production which will be enough to satisfy fans of his Tv sitcoms Seinfeld and Curb Your Enthusiasm, but "may leave others frustrated that a great cast, set and director were wasted".

The New York Post's Elisabeth Vincentelli rated it just two-and-a-half stars out of five and noted David seemed lost onstage, and Time's Richard Zoglin insisted it was "funny only in spurts", while Newsday's Linda Winer was also bewildered by the popularity of the comedy, writing, "Everyone around me seemed to be having a wonderful time. Wish I were there".

However, not everyone agreed with the lack of hilarity - Vulture's Jesse Green writes, "It's well built, occasionally thoughtful, and consistently very funny if not transcendently so. In short: You'll laugh, you'll cry... Fish in the Dark is amazingly confident and delivers what it promises", and USA Today's Elysa Gardner, who marks it three out of four, makes it clear not to expect anything more than a typical Larry David performance, quipping, "What, you were expecting Chekhov? Surely, even Larry David's most ardent fans weren't hoping to have their lives changed by Fish In the Dark."

Fish In the Dark co-stars Rita Wilson and Rosie Perez and is directed by Anna D. Shapiro.