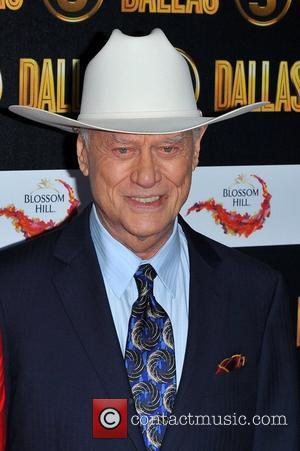 Larry Hagman has been given the all-clear in his cancer battle, according to his Dallas co-star Patrick Duffy.
The 80-year-old actor was diagnosed with throat cancer last year (11) just weeks before he was due to reprise his role as oil baron J.R. Ewing in a relaunch of the beloved series, but he has since been declared cancer-free.
Duffy tells British newspaper The Sun, "Thankfully, he has now been given a clean bill of health and is coming back for season two."
The actor admits it was heartbreaking for him to act out scenes in which his own character Bobby Ewing fights cancer after learning his pal and onscreen brother had been diagnosed with the disease in real life.
He recalls, "It was so, so hard to film those scenes. All of a sudden art imitates life, just in reverse, and it was hard.
"I was already in Dallas ready to go to work. And Larry called, maybe four days before he was supposed to come on set, and told me he had throat cancer. I was like, 'What? No!' When it's your best friend going through it, it's really difficult to watch. He was having chemotherapy and radiation the whole time he was working. And I was doing scenes where I had cancer. It's incredible how he did it."