Alex Reid takes inspiration from religious figures such as Buddha and Jesus and tries to live his life peacefully. 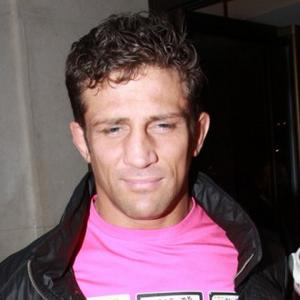 The cage fighter - who married glamour model Katie Price in a surprise Las Vegas ceremony in February - insists he tries to live his life peacefully and looks to religious figures for inspiration on how best to handle situations.

He explained: The fact is, this is a nasty world. And that's why I do martial arts. And also a wonderful world and that's why I say, 'Para bellum.' They're Latin words, which I can't remember exactly, but they mean, 'For peace, prepare for war.' That's kind of my motto.

"I mean, I wish I could be more like Gandhi or Jesus. Turn the other cheek. Because when he came across confrontation, he just let them strike him down! But for me, no!

"I left the army because I didn't want to kill people, but I believe we do need soldiers. There are evil people. Like Adolf Hitler. Those sort of things are going off all the time in the world."

The 34-year-old star - who has previously revealed he is trying for a baby with his wife, who has three children from previous relationships - also spoke of his desire to create "a masterpiece" to ensure his legacy remains forever.

He added to the Observer magazine: "What I want to be is known for something amazing. So people might not even know my name, but. for example, who was the guy who invented the Eiffel Tower? Was it Mr. Eiffel?

"Or the pyramids! Something that will stay for ever. You make something, and it's just there. It's your mark. I want to create a great work - a masterpiece.

"I want immortality. For ever! We're all immortal, because we have children, and, that's you. And I believe, not to go all spiritual, but you could go that way, with spirits and what have you."