Imagine moving thousands of miles from home and within months everything you owned (musical instruments included) was destroyed in an apartment building gas explosion. That's exactly what happened to Portland singer-songwriter Laura Gibson when she moved to New York following the release of her third album in 2012, La Grande. New record Empire Builder is deeply indebted to that experience, although it never directly references it, primarily because Gibson is pre-occupied with rebuilding and moving past loss. Despite a sombre tone to many of these songs there's much to admire here, they're less carefree, but far more intimate and revealing than some of her previous work.

One of the reasons why these recordings have a more raw and uncomplicated sound is a logistical one. Gibson's performances were laid down as scratch tracks before she lost her lyrics and instruments in the explosion. Much of that material has survived in the final version of Empire Builder. You also get the impression that there's a deliberate effort to focus more on the lyrical content, so while some of her previous collaborators are present here (The Decemberists' Nate Query, Death Cab For Cutie's Dave Depper, among others), Empire Builder rarely feels like an ensemble affair. Indeed the least 'Folk' moment that strays into other genres most blatantly with the help of Peter Broderick's violin is the lead track 'The Cause'.

It's also that track which shows Gibson's development as a lyricist. It should be no surprise that she's studying for an MFA in fiction writing when she starts pulling out lines like: "What is love then? But to drag a dead deer by it's horns from the passing lane". There's something bleak about that line, which is set against an up tempo track that could even be considered a waltz. It tells you a lot about Gibson's mindset that she sees something joyous as a burden in her phrasing. It's that approach which infuses these songs with something unique. Even when the record seems to revive itself from its introspection during the Country-tinged 'The Kids', Gibson still injects something unexpected: "If we're going to die young, we're going to die with a love song in our mouths".

Delicate, fragile and heartfelt: just three of the words that could be used to describe Laura Gibson's new album. While La Grande's ten songs occasionally sound muddled with an array of musical ideas, there's no doubting that her third solo record is accomplished in its execution.

Delicate, fragile and heartfelt: just three of the words that could be used to describe Laura Gibson's new album. While La Grande's ten songs occasionally sound muddled with an array of musical ideas, there's no doubting that her third solo record is accomplished in its execution. 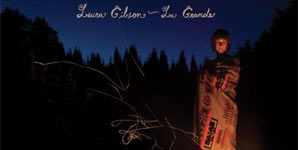