While this sibling comedy makes some sharp observations about the push and pull of family relationships, it's also one of those deliberately wacky movies that wears us out with nonstop gags that are utterly unconvincing. Filmmaker Todd Sklar is clearly more amused by letting each scene spiral out of control than by developing the characters into properly comical figures.

The story centres on brothers Dave and Jim (Rennie and Pumphrey). After their dad dies, the married and sensible Jim finds Dave naked and unconscious in a South Dakota teepee. An unapologetic slacker, Dave's relentless irresponsibility drives Jim crazy. But they need to travel to Branson, Missouri, to sort out the details of their father's lake house, which they've inherited. After a brief and chaotic road trip, they arrive to find the cabin in need of basic repairs. Working with their dad's agent Jon (Meloni), they decide to stick around and do the work themselves, hoping it might help them bond as brothers. If they don't kill each other first.

The film's improvisational style allows actors Rennie and Pumphrey to run wild with their characters, which means they have little consistency. We never quite believe them as brothers, mainly because Dave is simply too random and ridiculous for words. His antics mean that each scene feels like a contained sketch, disconnected from anything else, including reality. So even though the performances are strong, the film veers wildly from slapstick to emotion to absurd gross-out wackiness. And each moment these brothers are together feels like it will quickly descend into a fist fight. Continue reading: No One Lives Review

Jaime Camil Is A Desperate Mariachi In 'Pulling Strings' [Trailer]

Pulling Strings touches on a sensitive issue in America: immigration, but puts a light-hearted spin on it, resulting in a hear-warming comedy with a romantic twist.

Jaime Camil stars as the Mariachi band member desperately attempting to get a visa for his young daughter, while Laura Ramsey is the embassy representative in dire need of his help. And in steps Omar Chaparro as Camil's funny sidekick – Canicas - which translates to Marble.

Alejandro Fernandez is a passionate Mexican Mariachi who loves entertaining the people of Mexico City almost as much as he loves his delightful young daughter. Life is tough as a single father barely scraping by on his earnings from singing, so when he attempts to obtain a visa for his daughter to visit family in the States, it's not surprising how swiftly he is turned away. However, he could be in for another chance when coincidentally he and his best friend Canicas land a gig at the promotion party of Rachel; the woman who rejected his visa application. When she winds up getting inebriated to the point of falling asleep in a bus shelter, Alejandro helps her home where she discovers that she has lost her boss' very important laptop that was entrusted to her. Alejandro decides to prove he deserves the visa by helping her track down the machine, while finding more than just a friend in her along the way.

Johnny Marco is content living the rock'n'roll dream, he lives at Chateau Marmont, is entertained by lots of ladies, his bathroom cabinets are filled with a selection of pills and he drives his Ferrari without much concern. He's one of the bad boys of Hollywood and the press love it. 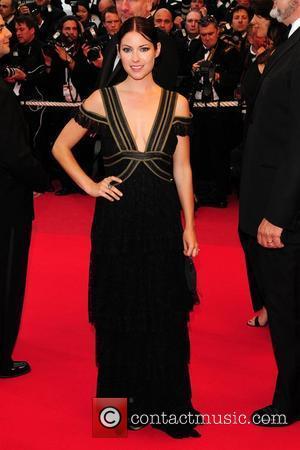 Alejandro Fernandez is a passionate Mexican Mariachi who loves entertaining the people of Mexico City...