Peter O'Toole has retired from acting after 58 years in the profession, which has seen him star in a number of classic films such as 'Lawrence Of Arabia' and 'Goodbye Mr. Chips'. 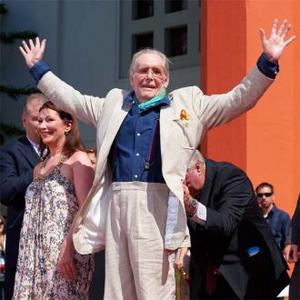 Peter O'Toole has retired from acting.

The 79-year-old star - who played the titular character in 1962 movie 'Lawrence Of Arabia' - has bid a ''dry-eyed'' farewell to the profession and praised all the ''fine people'' and ''good companions'' he met throughout his career.

He wrote in a statement: ''It is time for me to chuck in the sponge. To retire from films and stage. The heart for it has gone out of me: it won't come back.

''My professional acting life, stage and screen, has brought me public support, emotional fulfillment and material comfort. It has brought me together with fine people, good companions with whom I've shared the inevitable lot of all actors: flops and hits. However, it's my belief that one should decide for oneself when it is time to end one's stay. So I bid the profession a dry-eyed and profoundly grateful farewell.''

The Irish-born actor was nominated for eight Academy Awards throughout his 58-year career, which has seen him star in classic films 'The Lion in the Winter', 'Goodbye Mr. Chips', 'Caligula', 'Man of La Mancha' and more recently in 2004 war movie 'Troy' alongside Brad Pitt, Orlando Bloom and Diane Kruger.

In 1975, Peter came close to dying after suffering from an abdominal irregularity, which saw him rushed into hospital for a big operation. Following the surgery, he vowed to give up drinking alcohol.

He said at the time: ''The time has come to stop roaming. The pirate ship has berthed. I can still make whoopee, but now I do it sober.''