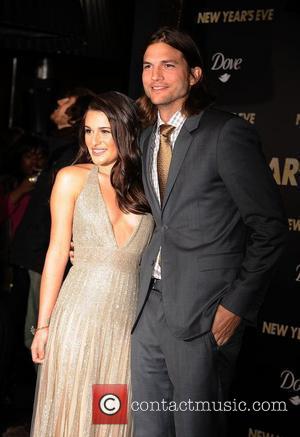 Lea Michele might be risking Demi Moore's wrath if recent pictures of her and 'New Year's Eve' co-star Ashton Kutcher are anything to go by - with the 25 year-old looking like she's keeping the actor's mind firmly off his divorce. Pictures in the UK's Daily Mirror show the pair being touchy feely at the Los Angeles premiere, walking down the red carpet together - despite Michele being there with another date albeit gay 'Glee' co-star Jonathan Groff. The pair were laughing and joking with each other, with Kutcher even managing to get a quick peek down the star's low-cut dress - hardly the actions of a man mourning the end of his marriage.
Afterwards, Michele had nothing but praise for Kutcher , whose marriage ended after allegations that he'd cheated on Moore with 22 year-old Sara Leal on their wedding anniversary night. With the actress also recently split up from her long time partner, the time could be ripe for the two to get together, and she said; "He constantly never stops working hard, that surprised me the most about him, and it inspired me so much." She went on to say, "He's also just an incredibly smart guy and he's so sweet and I'm so thankful to have been given him as a costar."
Michele's praise for him didn't stop at interviews either, the actress took to her Twitter as well to say "aplusk it was such an honor working with you," she tweeted. "I cannot thank you enough."