Lea Michele is worried about how big her nose is going to be in the 3-D film version of 'Glee'. 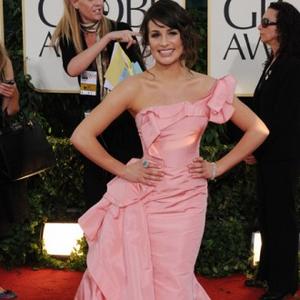 Lea Michele is worried about how big her nose is going to be in 3-D.

The 'Glee' starlet is excited about the news the show's current summer tour is to be made into a film, but joked she feels "sorryâ for people who may end up being poked by her virtual nose when they go to see it in cinemas.

She told the E! news network: "My nose is gonna be insane. People are gonna put on those glasses, and I feel bad for them!"

Lea, 24, also said she's still getting used to being invited to A-list events and is always worried she will be thrown out of them, such as when she attended the New York Met Gala earlier this week hosted by Vogue Editor Anna Wintour.

She added: "It was outrageous. You never think you're gonna be in that room with all those fantastic people!

"I felt like, at any minute, Anna Wintour was gonna come up to me and be like, 'Out!' "

'Glee's concert movie is set to come out in the US on August 12.