Does Anybody Really Care If Led Zeppelin Play More Shows? 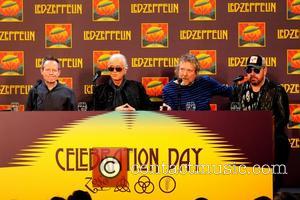 Led Zeppelin's Celebration Day' press conference was a feisty affair from start to finish at the Museum of Modern Art on Wednesday (October 10, 2012). After an Associated Press journalist asked if the new movie would lead to something more substantial (a comeback), the band remained silent, before Plant piped up.

"I mean, we've been thinking about all sorts of things.And then we can't remember what we were thinking of. Schmuck." It set the tone for a fraught press conference, with Plant seeming particularly uncomfortable from thereon in. "There are some people in here who are not journalists.There's a masseuse in here who's not a journalist. I think that's ever so exciting," he added. The clamour for tickets to Led Zeppelin's 2007 reunion show at London's O2 arena was so intense that it remained a certainty the group would play further shows; but then they didn't. Now, with promotion of 'Celebration Day' in full flow, the group are under fire from journalists eager to get the scoop on further live shows. Plant and guitarist Jimmy Page have so far refused to dish on any plans, instead choosing to treat probing rock journos with haughty contempt. It all begs the question; does anybody really care if Led Zeppelin play a hugely overpriced show at a huge arena with bad sound? Unless they plan on keeping something under wraps for a big announcement, it's difficult to understand why the band remains so intent on giving everyone a hard time over it.

Plant is now 64-years-old, Page even older; we're guessing their best song-writing is behind them and new live shows would only serve as a nostalgia trip for those who enjoyed Led Zeppelin at their peak. So do us all a favour guys; if you've got something to announce, announce it, if not, tell the fans they're going to have to settle for the DVD.