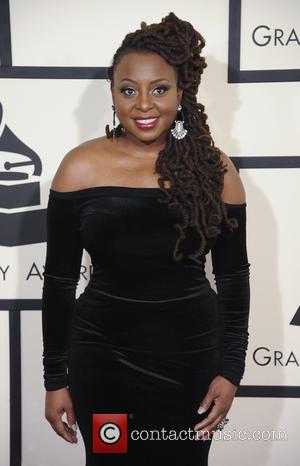 Picture: Ledisi - A variety of stars from the music industry all turned out in style to attend the 57th Annual Grammy Awards in Los Angeles,...

R&B singer Ledisi refused to get upset when she learned Beyonce would be belting out the song she sang in the movie Selma at the Grammy Awards, because she understands you don't say no to Queen Bey.

Ledisi portrays gospel icon Mahalia Jackson in the Martin Luther King, Jr. biopic and her version of Take My Hand, Precious Lord was featured on the movie's soundtrack, but it was Beyonce who hit the Grammys stage with Common and John Legend on Sunday (08Feb15).

The 42 year old admits she was "a little disappointed" not to have been invited onstage, but she understands why the superstar was a more suitable choice for the globally televised prizegiving.

Ledisi tells The Associated Press, "I got over that (the disappointment) and I had to look at the positive and empower women. We have to empower each other. It's a great thing. And one day I'll be on that Grammy stage. Every artist wants to be on the Grammys stage. That's part of our career is to be there. So my time will come when it's time."

She adds, "I was able to portray an iconic gospel singer, the queen of gospel Mahalia Jackson. I sang the version she sang... and now we get to see Beyonce sing a song that's been living forever and to her generation. It's great. I'm part of a legacy of great women and the Queen of Soul (Aretha Franklin) sang it as well. So I'm a part of that."

John Legend, who performed his Oscar-nominated Selma song Glory with rapper Common at the Grammys, reveals it was actually Beyonce who asked if she could get involved and he didn't want to turn her down.

He explains to U.S. news show Entertainment Tonight, "We were actually approached by Beyonce. She wanted to do an intro to our performance and introduce us. You don't really say no to Beyonce if she asks to perform with you."