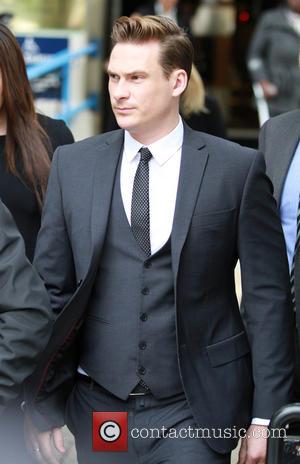 British pop star Lee Ryan has been banned from driving and fined $5,320 (£3,325) after pleading guilty to criminal damage and failing to co-operate during a drink-driving arrest.

The Blue singer, 30, was spotted driving his vehicle erratically by police officers in London on 11 April (14) and was arrested on suspicion of driving under the influence and drug possession following a search of his car.

He was charged with failing to provide a specimen after refusing to undergo a breath test at the scene, and he was later hit with a criminal damage charge for urinating in his holding cell at a police station.

Ealing Magistrates' Court in London heard on Friday (02May14) how officers discovered an empty liquor bottle by the driver's seat of the car and Ryan stank of alcohol and was slurring his words. He also repeatedly yelled expletives at officers from his cell after his arrest.

The singer pleaded guilty to both charges on Friday and was hit with a two-year driving ban and the $5,320 fine. The drug possession allegation was not proceeded with.