Leighton Meester thinks her new husband Adam Brody is ''incredible'' and loved getting the chance to work with him again on their upcoming movie, 'Life Partners.'

The former 'Gossip Girl' star, who tied the knot with the actor in a secret ceremony in February after meeting him on the set of their film 'The Oranges' in 2011, loved getting the chance to work with him again on their upcoming movie, 'Life Partners.'

She added: ''It was the best. We basically got to say whatever came to our minds. There was a lot of improv.''

The brunette beauty is currently starring in the Broadway production 'Of Mice and Men' with Chris O'Dowd and James Franco, who branded a New York Times critic ''a little b***h'' for giving him a less than glowing review this week.

Earlier this month, the 35-year-old actor, who has since deleted his attack on Instagram, was forced to apologise for contacting Scottish student Lucy Corde, 17, via the social networking site and trying to arrange to meet her in a New York City hotel after she caught his eye outside the theatre.

He said: ''I'm embarrassed, and I guess I'm just a model of how social media is tricky. It's the way that people meet each other today, but what I've learned -- I guess because I'm new to it -- is you don't know who's on the other end.'' 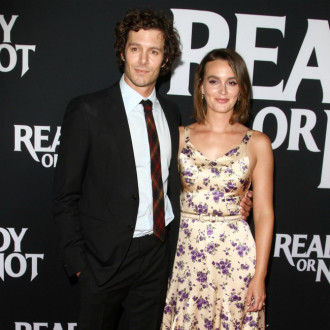