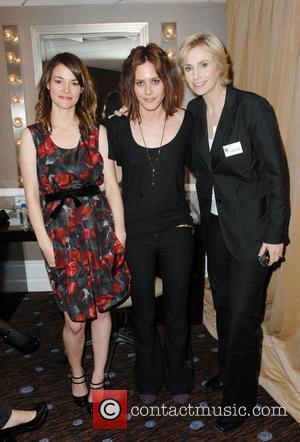 Leisha Hailey, the American actress who was thrown off a Southwest Airlines flight for 'excessively' kissing her girlfriend has got the backing of Kelly Osbourne over her call for passengers to boycott the airline. Hailey and her partner were travelling on a flight to St Louis when an air hostess alerted her to complaints concerning her behaviour.
Leisha, best known for her role on hit drama 'The L Word', recalled the incident on her Twitter page and immediately received a flurry of supportive messages. An enraged Kelly Osbourne recalled previous occasions that Southwest have refused famous passengers, telling followers, "SouthwestAir told Kevin Smith that he was too fat to fly, Billy Joe Armstrong that his pants were to saggy to fly", before adding, "SouthwestAir also told a lady that she was too slutty 2 fly & now they've kicked Leisha Hailey of The L-Word off a flight 4 kissing". After debating the issue with several followers, Osbourne stated, "America is supposed to be the land of the free and the home of the brave! so why when someone tries 2 be brave & free do u knock them down?". Leisha also received support from musician Moby, who echoed Osbourne's remarks, telling followers, "southwest air has kicked people off of their planes for: kissing, wearing baggy pants, and being overweight. so: boycott southwest airlines".
Before making the foray into television, Hailey was previously the singer with rock duo THE MURMURS.