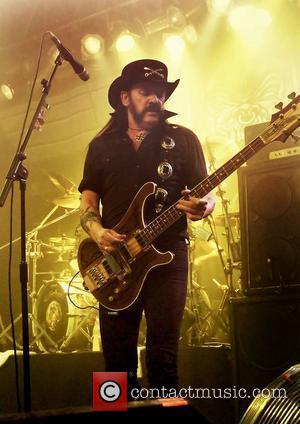 Picture: Lemmy Kilmister of Motorhead performing on their 'The World is Yours' tour at Liverpool University Mountford Hall Liverpool, - 06-11-2011

An injury to rocker Lemmy's left hand has been listed as the reason for the cancellation of a Motorhead show in Bristol, England on Tuesday night (08Nov11).
The heavy metal trio had to pull the plug on a concert at the Colston Hall after the legendary frontman was left unable to perform.
The show, which was to feature Anti Nowhere League and UK Subs as support acts, will be rescheduled, according to venue bosses.
It is not known if Motorhead's gig in Norwich, England - scheduled for Friday (11Nov11) - will go ahead. The group has six more dates on its British tour.
No further details about the extent of the Ace of Spades singer's injury have been released.