Girls Co-stars Lena Dunham And Allison Williams Locked Lips On Wednesday (18mar15) As Part Of A Charity Challenge In Support Of Autism Research. 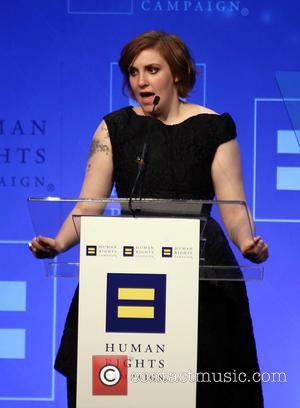 Picture: Lena Dunham - A variety of stars were photographed as they attended the Human Rights Campaign Los Angeles Gala Dinner 2015 which was held at...

The actresses accepted the 'Twizzler Challenge' in which two participants bite down on ends of the red licorice candy and chew on it until their lips meet for a kiss.

Dunham and Williams posted a video of their challenge on Instagram.com, with Dunham saying in the footage, "We are here to take the Twizzler Challenge for autism..." as Williams added, "New York Collaborates for Autism, we love you."

After they shared a smooch, Dunham confessed, "I have a cold! I didn't want to tell you until now."

The two then challenged Broad City comediennes Ilana Glazer and Abbi Jacobson, actors Larry David and Rita Wilson, and Scandal's Katie Lowes and Guillermo Diaz, who accepted and posted their own video on social media later that day.

The Twizzler Challenge began earlier this month (Mar15) during annual U.S. telethon Night of Too Many Stars, which works with the organisation New York Collaborates For Autism to raise awareness and funds for research into the developmental disorder.