Lena Dunham has plenty to say to her hero Sarah Jessica Parker. 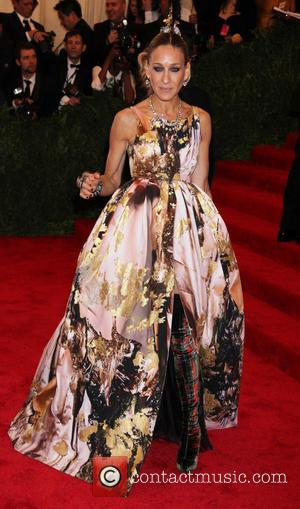 What could possibly happen should Lena Dunham ever meet her hero Sarah Jessica Parker? That's what fans of the Girls star have asked themselves over the past year, but the waiting is finally up: the two women have finally met, at New York's Museum of Art's Costume Institute benefit gala on Monday night (May 6, 2013).

Dunham has made no secret of her love for Sex and the City or its influence on her award winning show. During an interview with TIME magazine, the writer and actress explained, "That was sort of the first thought was that Shoshanna [Zosia Mamet's character] would have moved to New York because of Sex in the City.  And a lot of these girls, even Hannah who might make fun of the girl who wears the "I'm a Carrie" T-shirt, part of the reason she came to New York is clearly because she thought she was a Carrie. It's almost like not only is this a show that talks about Sex and the City, these are women who couldn't exist without Sex and the City."

So what happened when Dunham met Parker? Well, there was plenty of hugging, plenty of air-kissing and plenty of animated conversation. Dunham wore a slender black Erdem gown while Parker, 48, opted for a Giles Deacon satiny print gown with mohawk-style headdress.

Dunham recently overhauled her writing team for season three of Girls while Sarah Jessica Parker is about to begin work on the comedy Married and Cheating.