Leonard Cohen's 12th studio album in 45 years is an understated, spiritual reflection on the virtues of old age. Unlike latter day returns to form for Bob Dylan and Johnny Cash, Old Ideas isn't meant to reclaim a reputation; instead it's more a summation of a career. However similarly to his contemporaries the 77 year old mines a rich vein of religion, love and death to create some of the most compelling songs of his career. 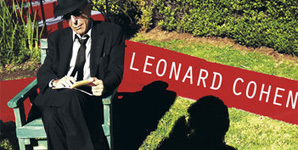 Cohen's dry sense of wit is evident from opener 'Going Home' as he refers to himself in the third person; "I'd like to speak with Leonard. He's a sportsman and a shepherd. He's a lazy bastard living in a suit". While not everything on Old Ideas is self referential, the characters share a common theme of internal monologue and reflection, relating directly to the album title. The idea of Leonard Cohen as a fictional creation for public consumption is also an interesting one; it feels as if you're being taken into the narrator's confidence and being given a peek behind the stage curtain.

That sense of laying bare the creative process translates musically on the 10 songs here. The record focuses on Cohen's voice that's starting to bear a striking resemblance to the gravel inflected tones of Tom Waits. No more so than on the gin soaked off kilter hymn 'Amen'. While there's the odd trumpet, violin or banjo to punctuate the lyrics, minimal percussion and piano or organ is the main order of the day for Old Ideas. Cohen's voice has in the past verged on a monotonous drone, here it's balanced by predominantly female choral singers. The experience and regrets of age drip from almost every word, and although the backing vocals can at times feel almost a little too saccharine in comparison to Cohen, they're effective in taking any bitterness away from his Canadian drawl.

The only track where Cohen takes somewhat of a backseat is 'Come Healing' which is structured as a hymn crossed with a religious sermon. The biblical imagery is scattered throughout the record though. From the creeping death blues of 'Darkness', which seems to refer to Holy Communion, to the moral quandary shuffle of 'Different Sides', it's clear Cohen's got one eye on the church. His gaze is otherwise directed towards more carnal pleasures. For example 'Show Me The Place' illustrates the metaphorical chains that can exist in a relationship governed by love and sex.

While Old Ideas doesn't announce itself with a fanfare and moves solemnly through much of its 40 minutes, there's little here not to like. Cohen has avoided the over production of some of his earlier work by stripping back the songs to their musical bare bones and fleshing them out with overarching, universal ideas. There's certainly beauty to be found amongst his confessions and regrets.