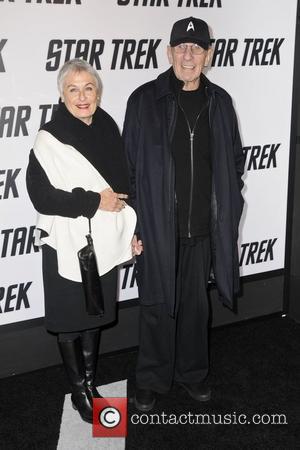 Leonard Nimoy is following in the footsteps of his Star Trek co-star William Shatner as he turns 80 years old this week (26Mar11).
The veteran actor celebrates the landmark on Saturday (26Mar11), just four days after his longtime friend reached the milestone.
Nimoy, like Shatner, shot to fame in the 1960s TV series in his career-defining role as Spock, which he last reprised in 2009 for a brief cameo appearance in J. J. Abrams' film Star Trek, alongside Zachary Quinto as a younger version of his pointy-eared character.
We now celebrate Nimoy's long running career and hope that he can 'live long and prosper' in his 80s.
Wenn has compiled 10 fascinating facts to remember Nimoy's achievements.

- Nimoy has written two autobiographies - I Am Not Spock (1977) and I Am Spock (1995), both in reference to his famous Star Trek character.
- He served as a sergeant in the U.S. Army in the 1950s, alongside actor Ken Berry and famed architect Frank Gehry.
- Nimoy went on to play an Army sergeant in the 1954 sci-fi film Them!
- The actor has been married twice and is father to two children. His current wife, actress Susan Bay, is a cousin to Transformers director Michael Bay.
- Nimoy voiced the character of Galvatron in 1986's The Transformers: The Movie, based on the popular kids' action figure range and TV show.
- Nimoy worked as a singer following the success of Star Trek, releasing five albums.
- He stepped behind the camera in 1985 to direct a music video for The Bangles. The Going Down To Liverpool promo also featured a brief cameo appearance from the actor, whose son Adam went to college with the band's lead singer Susanna Hoffs.
- Nimoy studied photography at the University of California, and in 2000 he announced his retirement from Hollywood to concentrate on his work behind the camera. He later returned to showbusiness.
- He is a keen poet and has published many of his works, including a collection called A Lifetime of Love: Poems on the Passages of Life in 2002.
- He has remained close friends with William Shatner since their Star Trek days and he acted as best man at Shatner's third wedding in 1997.