Leonard Nimoy attended his last 'Star Trek' convention event at the weekend, telling the crowd to ''live long and prosper''. 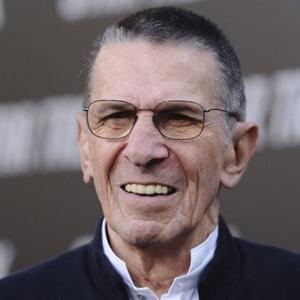 The 80-year-old actor - who has played character Spock in the original TV series 'Star Trek' and seven film instalments - gave an hour long speech at the official 45th Anniversary Star Trek Convention in Rosemont, Illinois, on Saturday (01.10.11) joking he grew up as parents of aliens in The Real World only to go on to become one for the rest of his life.

He told the applauding crowd: "So emotional. Thanks. You know, my parents came from Russia. They came to the Unites States as aliens. I was born in Boston a citizen. Then I became an alien - a very unsettling feeling. My life quickly got pretty crazy - I hadn't anticipated what it would be like to be on a regular television series every week."

Fans in the crowd held up posters and banners and gave the Vulcan hand signal he became famous for, and upon leaving he told the crowd to "live long and prosper".

Writing after the event on twitter, Leonard wrote "So much to be thankful for. The video from the Star Trek cast. Jj Abrams. FUNNY. The wave of kindness from the crowd. My family there. (sic)"

Leonard announced last year he planned to retire from the role he was most famous for, and wanted to hand over Spock to Zachary Quinto, who played him in J.J Abrams' 2009 movie 'Star Trek'.

He said: "I've been doing this professionally for 60 years. I love the idea of going out on a positive note. I've had a great, great time.

"I want to get off the stage. Also, I don't think it would be fair to Zachary Quinto. He's a terrific actor, he looks the part, and it's time to give him some space. And I'm very flattered the character will continue."