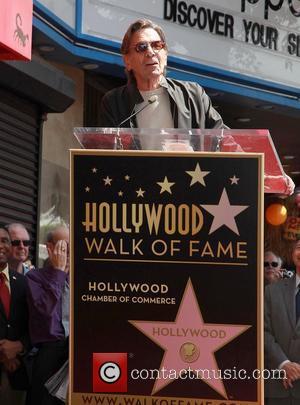 Picture: Leonard Nimoy, at the Walter Koenig honor with a Star on the Hollywood Walk of Fame. Hollywood, California - 10.09.12

Leonard Nimoy and George Takei were among the Star Trek actors who saluted Walter Koenig on Monday (10Sep12) as he joined his former castmates in receiving an honour on the Hollywood Walk of Fame.
Koenig, who played Pavel Chekov in the hit 1960s sci-fi show, unveiled the 2,479th star on Hollywood Boulevard, close to Takei's pavement plaque.
He was joined by his former co-stars Takei, Nimoy and Nichelle Nichols, as well as his wife Judy Levitt and daughter Danielle, at the ceremony - and he was overwhelmed by the accolade.
Speaking of his star honour when it was announced last year (11), Koenig declared, "This is something that you hope and wish for, dream about, but something you never expect to really happen. It's a joyous occasion and I am deeply honoured."