Actors in the 'Les Miserables' film are in danger of losing their voices because director Tom Cooper is making them perform songs from the musical live for every take. 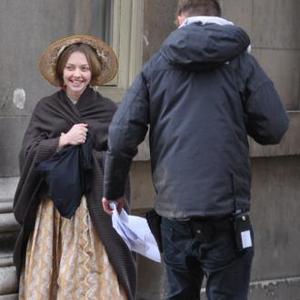 Actors in the 'Les Miserables' movie are in danger of losing their voices.

Director Tom Hooper insists stars including Russell Crowe, Hugh Jackman, Amanda Seyfried and Anne Hathaway perform the songs from the musical live for every take and refuses to use it if there are any bum notes, leading to problems for the cast.

A source told The Sun newspaper: ''Every big musical number is being recorded as live which is a huge challenge to the cast.

''It has to be note-perfect or Tom won't use it, he's a real perfectionist.

''Some of the cast have been belting out songs a number of times in a row and it's taken its toll on their voices.''

However, the cast are also managing to have a laugh during shooting in London with Hugh keeping the crew entertained by asking to re-shoot fight scenes where he knocks Russell out, because he enjoys it so much.

A source previously said: ''The crew find it hilarious as Crowe would obviously sweep the floor with Jackman in real life.

''Hugh keeps ribbing Russell and winding him up but he's been getting his own back by calling Hugh a twirlie, which is showbiz speak for a singer/dancer.''