Lewis Hamilton has had a lion inked on his chest as a symbol of ''mastering your emotions''. 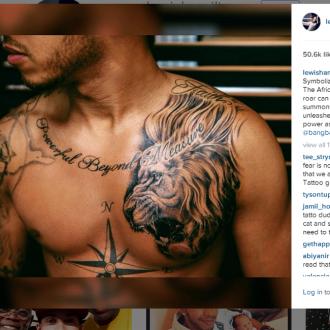 Lewis Hamilton has had a lion tattooed on his chest.

The Formula One world champion posted on Instagram a photo of the new inking, which has been designed by Rihanna's tattoo artist and covers the left side of his chest on Instagram.

Lewis has described the meaning behind the design as a symbol of ''mastering your emotions''.

Lewis posted the photo on Wednesday (22.07.15) alongside a caption which read: ''The African Lion Symbolizes mastering your emotions... The African lion roars ferociously and the roar can be heard for miles... It is summoning the power of the sun to be unleashed at his will, he proclaims his power as a message and a warning (sic)''

The ''mastering emotions'' theme of the body art could be inspired by his split from ex-girlfriend Nicole Scherzinger, who the 30-year-old motor racing driver recently separated from following a seven-year on/off romance.

The tattoo comes not long after he gushed about the former Pussycat Dolls singer and sent a heartfelt message on her birthday last month (29.06.15).

He posted a caption on Instagram, which read: ''Dear friend, Through the years we shared alot, i wouldn't have changed a thing. All the experiences made me the man I'm proud to be right now. The Memories together will never be taken away no matter how old we get and I'm thankful for the time we had. I'm wishing you the Happiest of Birthdays, and may God continue to Bless you in all that you do. #waayyyupstayblessed (sic)''