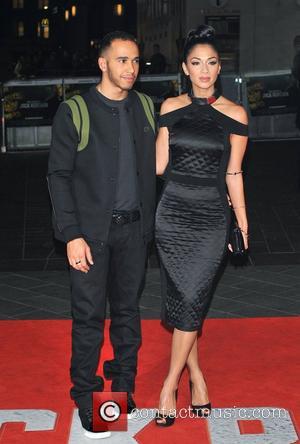 Lewis Hamilton is best known for being the youngest ever Formula 1 World Champion, which he won back in 2008 aged just 23, but his girlfriend, ex-Pussycat Doll and X Factor presenter, Nicole Scherzinger has revealed to Capital FM that he is also recording some of his own music.

"He loves music. He's always loved music since he was young and he plays the guitar so he's been recording some tracks, doing his thing for fun," Nicole told Capital FM. Apparently, "It sounds amazing." While we'd love that to be true, theres' a nagging feeling that Nicole may just be playing the supportive girlfriend role. Although, she didn't mention whether it's music that he's likely to release to the public or whether it's just a hobby. "Everybody's free to do music or something, a hobby or what they love, so I do nothing but support him. You can't listen to the haters out there," she says. "I mean, if he wants to record some songs and be creative then there's nothing wrong with that." Sounds like just a hobby, shame.

Nicole added. "Me getting in a car trying to drive really fast, now that's scary!" It seems she'll be sticking to music, but at the moment it's unclear as to whether she'll be sticking to the X Factor. She beat all the other judges by having two of her artists reach the final, and one of them win - James Arthur. She's said she'd like to go out on a high. While we may never hear any of Lewis' music, Nicole has a new single out at the moment called 'Boomerang'.

While we wait for Hamilton's musical offerings, here's Nicole Scherzinger with her 2011 single Coconut Tree: