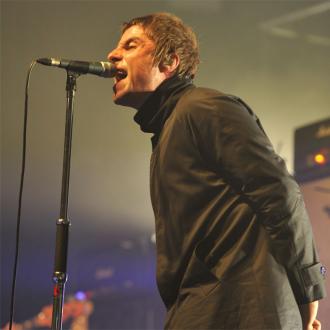 Liam Gallagher was joined on stage by former Oasis guitarist Paul 'Bonehead' Arthurs for first time in 14 years at the 'A Night For Jon Brookes' tribute concert.

The two ex-bandmates played with Andy Bell, Chris Sharrock and Jay Mehler from Liam's current band Beady Eye and performed Oasis classics 'Live Forever' and 'Columbia' at the show held in memory of the late drummer at The Royal Albert Hall in London on Friday night (18.10.13).

Regular Beady Eye guitarist Gem Archer - who is recovering from a fractured skull and broken leg - was among the audience watching and was seen using a crutch to walk.

Later in the evening, Liam, Andy and Bonehead joined The Charlatans on stage to perform a cover of George Harrison's 'My Sweet Lord' which Liam dedicated to Jon's widow Debbie.

Earlier, Manic Street Preachers frontman James Dean Bradfield played a solo acoustic set made up of 'Motorcycle Emptiness', 'A Design for Life' and 'If You Tolerate This Your Children Will Be Next'.

James paid tribute to Jon on stage, saying: ''I met Jon a fair few times over the years, I won't get too deep ... but he was f***ing beautiful and the boy had groove!''

They played three songs including a cover of Joy Division's 'Love Will Tear Us Apart'.

The Charlatans headlined the evening with former Verve drummer Pete Salisbury replacing Jon, who tragically died from brain cancer in August aged just 44 after battling the illness for three years.

They played a selection of their greatest hits such as 'North Country Boy', 'The Only One I Know', 'How High' and 'One To Another'.

Introducing a moving rendition of 'My Beautiful Friend', singer Tim said: ''I think we can all guess who this is for.''

They closed with their usual encore of 'Sproston Green'.

Andy Bell took to his Twitter page today (19.10.13) to share his pride at being part of the special concert.

He wrote: ''Morning all. Wow thanks to @thecharlatans @Tim_Burgess @markcharlatan for putting on a great event for Jon.

''A pleasure to be part of it ... If I say so myself, @liamgallagher @Beady_Eye & @ParlourFlames were on fire! Loved @Tim_Burgess & friends doing ''Love will tear us apart''too (sic)''

Tim Burgess also took to Twitter to thank everyone involved in the concert and the fans who went.

He tweeted: ''A huge thank you to everyone who came to last night's gig, those who performed & all the lovely people who worked on it.''

All proceeds from the show went to The Brain Tumour Charity, of which The Charlatans are now patrons.