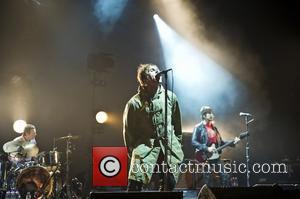 British rocker Liam Gallagher has threatened to tattoo his lyrics on Ian Mcculloch's forehead after the Echo And The Bunnymen star mocked his songwriting skills.
The singer has wrote more music since fronting his new band Beady Eye following Oasis' split in 2009, as his estranged brother Noel was the principal songwriter for the Wonderwall hitmakers.
However, Gallagher's new work failed to impress MCCulloch, who took a swipe at the rocker's post-Oasis material in an interview with the Irish Independent.
He said, "I like Liam, but, to be honest, Beady Eye are crap. He looks like a fish out of water. He should have bided his time and thought a little more about the lyrics that might be worth writing."
And despite the remarks being published last year (11), Gallagher took to his Twitter.com account on Sunday (27May12) to warn MCCulloch not to mock his work.
He writes, "Ian MCCulloch you wanna watch what your saying about my lyrics or I will come and tattoo them on your forehead."