Liam Gallagher partied ''until the break of dawn'' with The Spice Girls after the Olympic closing ceremony. 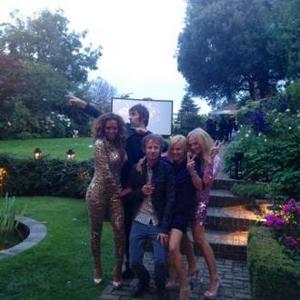 Liam Gallagher partied ''until the break of dawn'' with the Spice Girls after the Olympic closing ceremony.

The Beady Eye singer and the girl band both appeared at the spectacle to end London 2012 last night (12.08.12), and afterwards spent time partying and meeting the athletes backstage.

Singer Mel C posted a picture of her posing with Liam, Mel B, Emma Bunton and Geri Halliwell with the caption ''happy times!''

Mel C made reference to her 1997 feud with former Oasis singer Liam, where he had said he wasn't going to the Brit Awards because if he bumped into the Spice Girls, he would ''smack them,'' to which she had replied when accepting an award he could ''come and have a go if you think you're hard enough.''

Echoing her words, she tweeted: ''Love @liamgallagher 'come and 'ave a go! (sic)''

This morning (13.08.12), Emma posted another photo, of herself, Mel B and Geri alongside Liam and Muse bass drummer Dominic Howard with the sun coming up behind them. Liam is pulling the trademark pose of runner and world record holder Usain Bolt, who took home three gold medals from the event.

Emma wrote underneath: ''Party till the break of dawn, and Mel is still l in her Outfit (sic).''

She later added: ''What an honour to represent our country and perform for all of the incredible Olympians. We salute you one and all.''

Fifth member of the Spice Girls, Victoria Beckham went home after the ceremony.