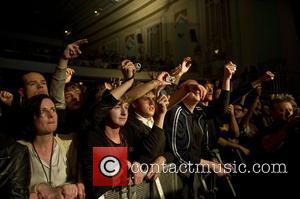 Liam Gallagher has taken a swipe at The Strokes frontman Julian Casablancas, insisting the singer clearly wants to ditch his bandmates and launch a solo career.
The Beady Eye rocker is baffled by the Last Nite hitmakers' popularity and is adamant the New York band has a bad "vibe".
And he singles out Casablancas for criticism because he's convinced the frontman makes it look like a "chore" to be performing with his bandmates.
Gallagher tells NME, "That singer just seems like he doesn't want to be in a band with them. It's like f**king go; bog off (go away). It seems like it's a chore for him, you know what I mean?... How can kids be into a band like that? How can they not get that vibe, man? It's like, f**k, come over to the Beady Eye side!"