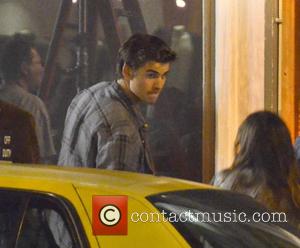 The Liam Hemsworth fight currently hitting the headlines can be seen on video over at TMZ’s site.

Miley Cyrus’ fella can be seen hitting a guy hard in the face during the brawl and at the end of the footage, the cops show up and sirens can be heard in the background though it seems the Hunger Games star made off with his friends and no arrests were made.

The incident occurred on Sunday morning (December 9, 2012), according to TMZ’s report and it seems that Hemsworth’s Hunger Games-style survival instincts kicked in when someone threw a rock at him and a friend. He confronted the guy that he thought had thrown the rock and in the footage, the guy can be seen on the floor, clinging to Liam’s leg. At that point, Hemsworth hits the guy in the face, plunging his head towards the cold, hard ground. Luckily, he didn’t have his bow and arrows with him and didn’t get a chance to re-enact Gale Hawthorne’s hunting prowess.

When the cops showed up, it seems that everyone dispersed and after the fight, the cameraman followed the guy that had just taken a beating. The victim tells the cameraman “I don’t think you would have fared any better” but refuses to reveal his full name – just identifies himself as Rob. No word from Liam’s camp just yet; we guess his PR gang are still thinking up legitimate excuses for the beating.