Liam Hemsworth was caught on camera punching a man in the face after he allegedly threw a rock at the actor. 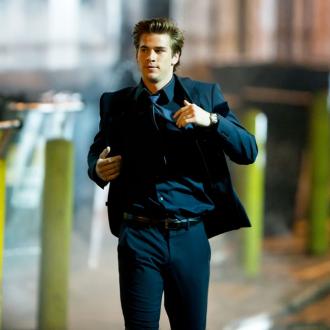 Liam Hemsworth was involved in a violent bust-up outside a bar.

The 'Hunger Games' heartthrob - who is engaged to Miley Cyrus - got caught up in a fight in the early hours of Sunday morning (09.12.12) after a fellow punter, known only as Rob, allegedly threw a rock at him.

The scuffle broke out when the 22-year-old actor and a friend left a bar in Philadelphia, where he is currently filming his new movie 'Paranoia'.

Liam was caught on camera by an onlooker punching the other man hard in the face while his friend helped hold down the victim, according to gossip website TMZ.

The crowd dispersed when the police arrived, and no one was taken into custody.

The victim - who can be seen bleeding and clinging to Liam's leg in the footage - was overheard joking after the fight: ''I don't think [Liam] fared much better.''

However, witness to the scene claim the actor emerged unscathed and said they didn't see a rock being thrown.

Liam's representatives are yet to respond.