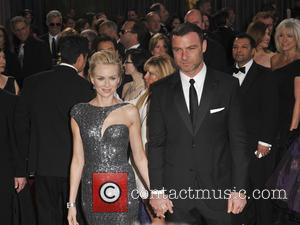 Actor Liev Schreiber played the role of a peacemaker over the weekend (29-31Mar13) after breaking up a fight between a waiter and a photographer outside a Los Angeles eatery.

The X‑Men Origins: Wolverine star had just finished dining at Giorgio Baldi in Santa Monica when a crowd of snappers gathered around his car to get an image of Schreiber as he exited the restaurant.

A male staffer came to the actor's rescue to help part the paparazzi, but he then got into a heated altercation with a female photographer, who appeared to take a swing at him with her camera as she tried to get closer for a picture.

In video footage obtained by x17online.com, the employee is featured shouting, "Get the f**k out. You touch me with that and I will eat you alive! You understand? I will eat you! Eat you!"

It is not known if any charges were filed.