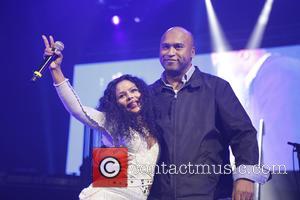 Picture: Lil Kim and Londell Mcmillan - American hip hop star Lil' Kim who has had hits with 'Lighters Up' and 'Came Back For You' performed...

Rapper Lil' Kim has been threatened with legal action after allegedly skipping a planned meet-and-greet with fans at a gay nightclub on Saturday (04Oct14).

The Lighters Up hitmaker's agent, Michael Benedetti, signed a $23,000 (£14,375) deal on the hip-hop star's behalf to have her perform at The Manor in Florida over the weekend and mingle with 100 devotees, who had paid at least $75 (£47) for an autograph and photo opportunity with Lil Kim.

However, bosses at The Manor claim Kim showed up late for the event and snubbed the fan meeting - forcing promoters to hand out refunds to disgruntled party-goers. They are now planning to sue the rapper for breach of contract, reports Tmz.com.

Kim alleges she was not made aware of the meet-and-greet session.