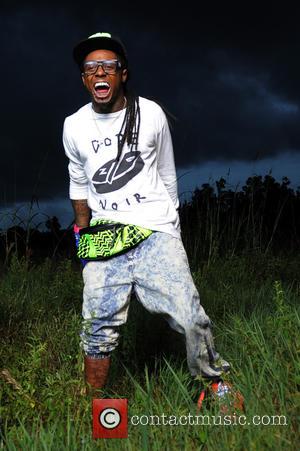 Picture: Lil Wayne - A spokesman for LIL WAYNE's record label has confirmed the rapper has suffered a seizure, but his aides are playing down reports...

Lil' Wayne has tweeted that he's fine, to reassure worried fans, after he was hospitalized with yet another seizure. TMZ reported that the rapper was taken once again to Cedars-Sinai hospital by his bodyguards on Tuesday night (April 30, 2013). The report states that he suffered a single seizure but was released the following morning, after receiving treatment.

30 year-old Wayne suffered multiple seizures recently and ended up in an ICU unit at Cedars-Sinai, where a number of his celebrity pals - including Nicki Minaj - visited him in hospital to wish him well. There were conflicting reports at the time regarding just how ill he was, though has business colleagues and label mates were keen to convey that he was doing just fine. Wayne himself has since been speaking on the radio about his epilepsy, explaining that he has suffered from seizures since he was a child. Speaking on Power 106 Los Angeles, he explained. "I'm epileptic; I'm prone to seizures. I've had a bunch of seizures, y'all just never hear about them but this time it got real bad because I had three of them in a row and on the third one my heart rate went down to 30%."

He admitted "I could have died" and revealed that stress and lack of rest triggers the seizures. "Overworking myself," he admitted, was the root of the problem. Following this most recent seizure, he tweeted "I'm fine. Thank u," to make sure his fans weren't worrying too much about him.