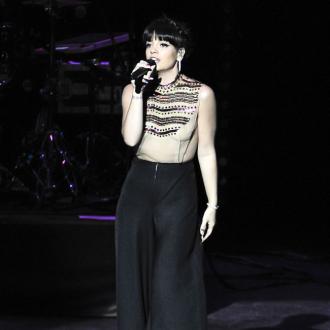 The 'Sheezus' singer dedicated her track 'F**k You' to the football administrator during her performance at this year's festival labelling him ''corrupt'' and a ''c**t''.

The 29-year-old said during her set on the Pyramid Stage last night(27.06.14): ''The next song is dedicated to possibly one of, actually not, the most corrupt, annoyingly corrupt, person there is in the world, Sepp f***ng Blatter, you c***.''

Following her controversial outburst, Lily, 29, encouraged revellers to ''raise a glass'' while she flashed her underwear and twerked on stage, singing a number of her classic hits including 'Smile' and 'The Fear' as well as a cover of Keane's hit 'Somewhere Only We Know'.

The Brit Award-winner - who performed shortly after a thunderstorm which led to a safety shutdown on the stage - remained enthusiastic about the set at the iconic Worthy Farm festival after a 45 minute delay.

She said: ''Thank f**k for that, the rain stopped! Just in time. I've got to be quick cos our set time has been cut short.''

The mum of three was also spotted drinking a pint before asking, ''Can I have some whiskey in there please?''.