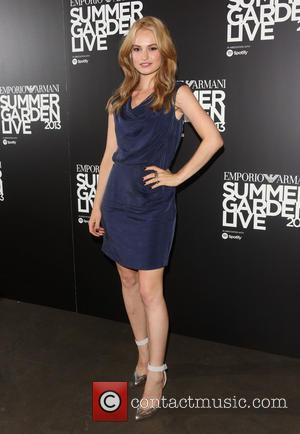 The Downton Abbey star, who plays the title role in Kenneth Branagh's new big screen adaptation of the fairytale, was taking a break during filming at Pinewood Studios in England when her ballgown was ignited by a portable heater in her dressing room.

The fire was put out and James, 24, escaped without injury.

Costume designer Sandy Powell tells Britain's Daily Mail newspaper, "It had turned really cold and someone had put a three-bar heater a bit too close to where Lily was going to sit on a stool. Luckily, just a segment of the silk dress got burnt. Thank God Lily wasn't harmed."

James adds, "I wore this wedding dress for about 20 seconds before I walked past the heater and burned some of it... I was fine. I wasn't hurt, just a bit shocked for a little while."